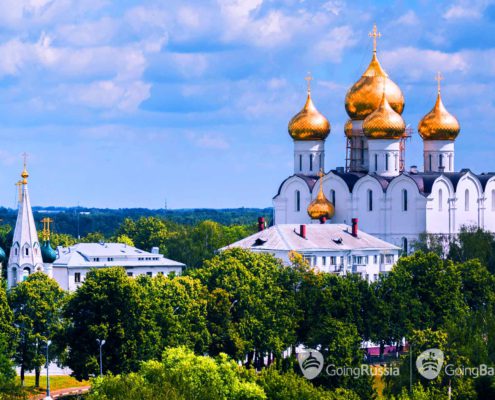 Located at the confluence of the Volga and Kotorosl rivers, Yaroslavl was founded in 1010 by Prince Yaroslavl the Wise on the site of an ancient Viking settlement. It grew rapidly as a major trading center due to its position on the Volga River, in 1218 becoming a principality, and in 1463 merging with Moscow. In the 17th century it was the second most important city in Russia, even serving as the provisional capital during the Polish occupation of Moscow. Yaroslavl enjoyed a second commercial revival thanks to being situation between Moscow and the sea port of Arkhangelsk, and in the 18th century Catherine the Great laid out a new urban plan for the city, stimulating a surge of industrialization that carried into the 19th and 20th centuries. This rich historical past has produced a great cultural heritage: Yaroslavl is an architectural gem boasting monasteries and churches among the finest in Russia and even featuring a unique, local architectural style that has expanded all over the country: so-called “Yaroslavl style” red brick churches are coated with bright tiles and decorated with colorful frescoes. Yaroslavl is one of the cities of the Golden Ring and is a member of the UNESCO World Heritage List.

Panoramic tour of Yaroslavl. We will see the city center laid out according to the urban plan and developed throughout the 18th and 19th centuries: here are the Gostinny Dvor main commercial galleries (1818), the Governmental Offices building (1785), Vakromeyev House, the State University – formerly the House of Charity (1786) – and the Fire Department, occupying a 1911 Jugendstil building. We will also encounter Volkov Theatre, the oldest founded in Russia (1750), though the actual building dates back only to 1911, along with many neoclassical private residences, administrative buildings, and the promenade by the Volga River. The kremlin was located at the fork where the Volga and Kotorosl rivers meet, called the Strelka, until it burned down in 1658. On its location, dominating both rivers, was erected the magnificent Dormition Cathedral, demolished by the Soviets in 1937 and restored and reopened in 2010 to celebrate the city’s millenary. The beautiful Epiphany Church with its 5 domes is also laid out nearby, an excellent example of a medieval Russian church. The Church of St. John the Baptist is one of the best models of a “Yaroslavl style” church, with its exterior coated in richly glazed tiles. We will then admire the main jewels of Yaroslavl: the Monastery of the Transfiguration of the Saviour and the Church of Elijah the Prophet.

Visit to the Monastery of the Transfiguration of the Saviour on the banks of the Volga, built as a kremlin, or fortress, to protect the city with its high white walls and towers. Within those walls is the remarkable Cathedral of the Transfiguration of the Saviour (1516), the city’s most ancient building, along with other churches, belfries, and dungeons. From this monastery the Russian peasant armies marched out to liberate Moscow from the Polish armies and from here also in 1613 Mikhail I set off for Moscow to be crowned the first tsar of the Romanov dynasty.

Visit to the Church of Elijah the Prophet. The church presently standing was built in 1650. This characteristic muscovite-style church has a simple exterior, while visitors are immediately struck by its richness immediately after walking through its doors: its walls and ceilings are overlaid with the most magnificent frescoes in the Golden Ring, painted at the end of the 17th century by 15 Yaroslavl and Kostroma masters. They depict vivid scenes from the daily life of the time in addition to some Old Testament references.